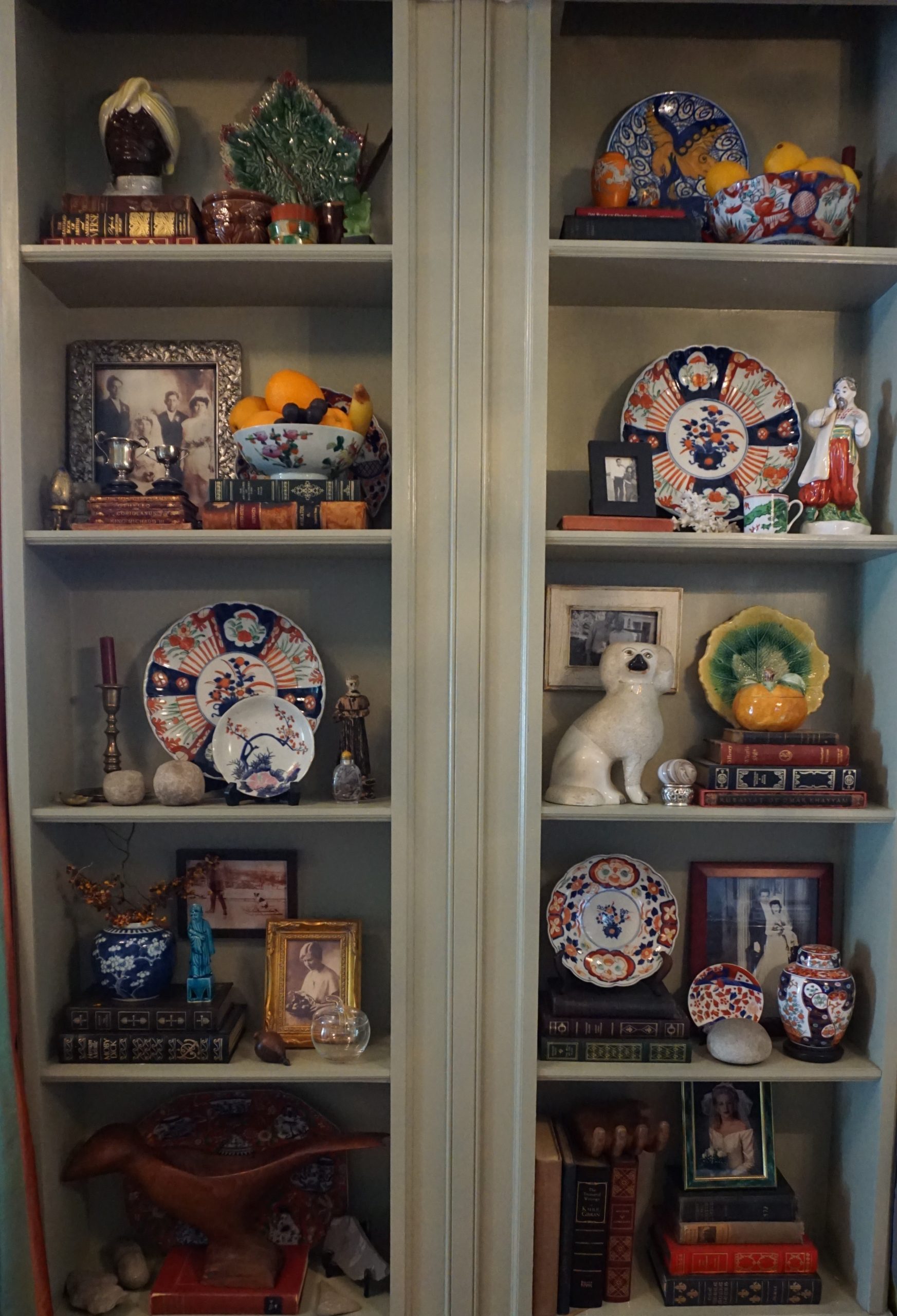 Joseph and I typically do housework early in the morning. Today in preparation for Thanksgiving I decided to dust the built-in-shelves in our dining room while I savored a couple cups of coffee (it was luxurious to have the Wednesday before the holiday off). Before removing the items from the shelves, I always snap a picture of each shelf with my phone to assure that I replace the items to their previous arrangement. Invariably, I change some of their placement and end up liking the new arrangement even better!

As I was going through my picture taking and dusting ritual, it dawned on me that we have decorated these shelves very near our dining table with memo ries. Among our collection of Chinese Imari plates and bowls, a lone English Staffordshire dog, a primitive Mexican Santo, Indian artifacts from the farm my mom grew up on, and many beautiful antique books. We have placed photographs and objects that evoke memories of very special people. There is a dapper picture of my Grandad John and Grandmother “E” sitting on my Swedish great-grandparents stoop in Fairfield, Connecticut. My grandfather is sporting fabulous two- toned brogues which are seemingly very out of character for my fruit-grower/farmer grandfather! There is another picture of him as a 13-year-old boy with his new sled and beloved Boston Terrier, Buster. Below that picture is his wooden top that he used to spin for me and my sister when we were little. Near that sits a beautiful, demure picture of my grandmother as a Winchester, Virginia Apple Blossom Princess –she was representing Vermont in the early 1930s.

Along with my family photos is a fun picture of Joseph’s Mexican-American maternal grandparents, Magdalena and Eligio in El Paso, Texas looking very much like the typical all-American 1940s bobbysoxers. Close to that is their very glamourous wedding photo in which they look like movie stars. (Joseph’s grandfather is a dead ringer for a young Ricardo Montalban.) There is also a gorgeous, very stately early 20th-century photo of Joseph’s great grandparents and their wedding party.

Keeping watch over all of these memories and our dining room is one my most treasured (if not my most treasured possession). It is a lovely vintage Royal Copley head vase of a very regal, turban-wearing African woman. The story behind this piece could have come straight from Kathryn Stockett’s book The Help. I was given this vase when I was four—an odd gift for a toddler right? Well, it was a gift that has truly shaped the person I am today.  Mary Townes a lovely, strong African American woman who had worked for my grandparents for years, was elderly. She was heading back to her North Carolina home place (“to die” as my grandmother would later say). She wanted me to always remember her, so she gave me this beautiful vase which I assume had been in her humble home. My mom taught me not to be a racist by saying, “How would you feel if someone said or did that to Mary Townes?” My mom also kept the vase safe for years and typically arranged beautiful daffodils in it every spring. When I was in my mid to late ’20s, she brought “Mary Townes” as we now called the vase, to me. It has held a place of honor in my home ever since. Not only has this vase served as a memory of a dear member of our family, but it has been a reminder to me that love and friendship have no color and know no race boundaries. As we sit down to dinner on Thanksgiving our multicultural built-in-shelves will populate our dining room with far more people than the eight of us who will be seated around the table. During the upcoming Christmas season, I would strongly suggest pulling out those old photos. Revisit all of those great memories and perhaps a few bittersweet ones. Find a few exceptional photographs and place them in a place of honor amongst your holiday décor. Decorating with memories will enhance your home/holiday and remind you of what is truly important. I typically resist saying that I am “blessed” because it seems so trite these days, but the photos and mementos we have placed in our dining room and throughout our home serve as reminders of how we have been blessed with a rich cultural heritage.

RIVERWOOD DESIGNS serves VIRGINIA and BEYOND.

Riverwood Designs believes the bridal couple along with their family and friends should relish the experience that is a wedding day. Through meticulous planning, attention to detail, and effective communication we create and foster experiences that bring a couple’s vision to reality.

Riverwood Designs creates wedding and special event floral designs and provides wedding and event planning management services. Because Riverwood Designs is not a retail storefront, our clients are people who we get to know, and they get to know us. We work with each client individually whether it is in an in-person meeting, a virtual meeting, over the phone, or via email. We custom fit each client with designs that fit their tastes, style, vision, and budget.